I stayed off my feet for most of the day, but I did venture out for a bit. I had to get my crutches and do some other errands. I was disappointed for the most part. Did you know that you can’t go to the pharmacy drive-up window and give them a prescription for crutches? The only think I can figure is, they can’t dispense them through the window. Go figure.

The lucky part came when Joy and I stopped for lunch. I had to restrain myself from running toward one of the best attractions I had seen in days: 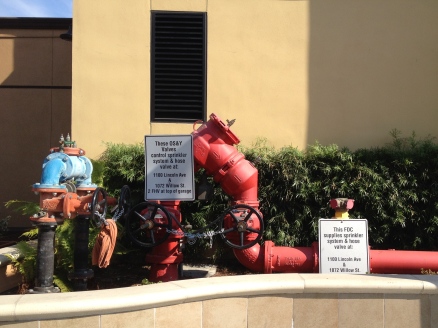 My other pictures of fire hydrants (photos and watercolor) may be found here: Fire Plugs, On the Road Again – and Fire Plugs, Concentration, Post-Birthday Post and Standpipe Portrait.

I did a quick sketch of the standpipe with the blue pipes. I painted it all except for the chain and the orange rag hanging from it.

I would say that my sketch is a kind of free-form mechanical drawing. From the photo I took of at this angle (not shown), the black wheels were not directly in front of the orange valves. In a sense my drawing is a bit of an abstraction.

I used a #2B pencil to sketch the skeleton of the pipe, so that I could place it correctly on the paper. I normally use an HB pencil (which I thought I was using), but the 2B worked almost as well. It was too soft for my liking.  I used a .3mm mechanical pencil to sketch in the shading and letter details on the pipes..

I used cerulean blue for the elbow pipes, warm orange (Utrecht) for the orange pipes, Hooker’s green for the two valves attached to the yellow ochre valves and burnt umber for the bolts on the orange valves and the center of the ivory black spoked wheels.

I might have to do a bit more abstracting to include all the piping in a watercolor sketch.