I used the gesture study published yesterday, as a starting point for today’s post. I took my own advice and started thinking about what my brother’s hand positions represented to me instead of trying to divine what he meant by them. For those of you reading my blog for the first time, my older brother is autistic and profoundly retarded. He has never spoken and is not very communicative.

Here is yesterday’s study – for reference:

The pair of hand on the right hand side of the picture frame the picture of an eye. In the photograph, from which these gestures were copied, my brother’s hands were on either side of his head: 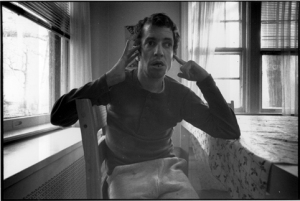 Instead of pairing the two hands, as in that study, I broke them apart visually. I used the finger pointing to the eye as representing my brother’s complete isolation and his only concern (seeming) to be about himself. The “eye” is the first-person “I”, which is my brother.

Mike usually holds one of his hands by his ear. I don’t know why. The portrait above suggests that he is listening to something, in fact I originally entitled this portrait, “Mike Listening”.  In the study below, I used this particular hand position as if it were the source of something, perhaps a sound.

The two focal points on the right hand side of the study below are the two hands. I consider it to be a distillation, or abstraction of the above picture. The hand on top is generating some stimulus, for which the only audience is the “I”, to which the hand on the bottom is pointing.

Irrespective of what my brother may have meant by his hand positions (if anything), I assign the following meanings: 1) the hand at the top is a stimulus generator; 2) the hand at the bottom is the autistic ‘self’, pointing to the inner landscape of the autistic person unable to communicate with the world outside him or herself. 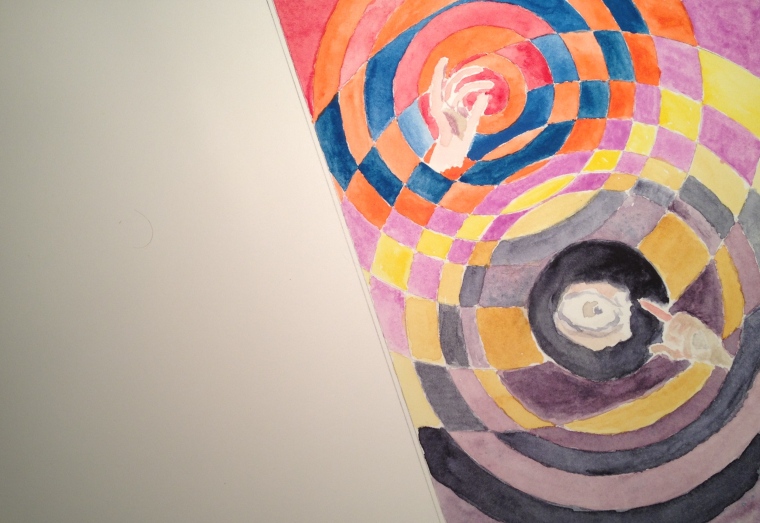 I am not particularly happy with the colors in this preliminary (half of a) study. I wanted a contrast between the muted colors on the bottom half and the brighter colors on the top, but I am not sure that it worked particularly well. Perhaps I can salvage it when I complete the left half of the piece, hopefully tomorrow.