I overwhelmed myself yesterday, trying to catalog images of hands to incorporate into a “Hand Atlas“.  My first mistake was trying to draw small images of hands with latex masking fluid. First of all, the scale was too small; secondly, I don’t know if it is possible to draw delicately with this medium.

I almost got sidetracked into questioning the cross-cultural significance of gesture, research into gesture analysis for human-computer interfaces and other scientific treatments of body language, etc.  My mind tends to gravitate to areas in which I am comfortable (science, analysis and so on) when I get stuck.  In this case, I am stuck with trying to incorporate my brother’s gestures into my iconography. Mike, my older brother, doesn’t communicate in any but the most basic ways. He is autistic, profoundly retarded and has never spoken. Therefore, his gestures or hand positions are idiosyncratic. I don’t think that he intends to communicate with hands, unless he takes your hand and leads you to where he wants to go. As everyone tends to do, he probably holds his hands in ways that are comfortable to him.

How to use his gestures in my art?

I used to wonder what he was trying to say to me, but have concluded that this is an impossible task. Therefore I must try to figure out what the significance of his gestures are to me. Once I figure that out, I can abstract them and use them as icons.

There are two sets of hands in the study below. The right-most set was abstracted from a portrait I took of Mike (see below). 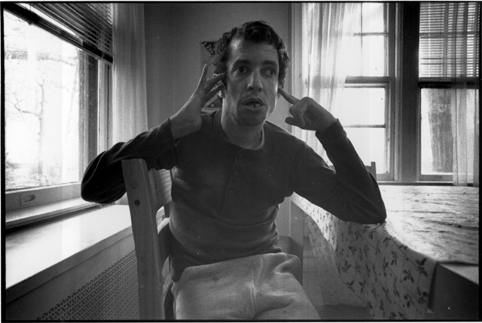 To me, the picture above is a stereotypical representation of autism. Mike seems to be absorbed in himself as if listening to some inner voices. His left hand is pointing, his right hand seems to be helping him concentrate.

In my study below, I interposed an eye between hands painted in the positions pictured above. It is a visual pun. Mike’s hands are pointing to the eye, or the “I” that is himself.  This represents the autistic alone-ness that I believe my brother has in abundance.

The other two hands in the study are involved in Mike’s frequent bouts of self harm. He frequently bites his hands and slaps his head. I think he does this when he is frustrated.

What happens to the atlas?

The idea of the hand atlas is still a good one. However, it is probably a good idea to treat each hand gesture separately, to do each one justice. The Atlas Project might end up being an entire wall of hand portraits.