I found another graffit-o-genic photograph in my files. I took it in 1991 during a walk through Coney Island. Coney Island is highly over-populated in the summertime, but nearly abandoned in the winter. I saw the cinderblocked opening to the ‘Reader Adviser’ building. The graffiti was incidental to me, at the time. What attracted me and caused me to snap the shutter, was the intricate nature of the tiles and columns framing the facade of the building.

I spent more time than usual with my sketch today. I used a combination of pencils (F and 2B), the former to sketch in details and the latter, to try out different shading possibilities. Details were important in this sketch. In fact I learned a lot by inking in the particulars of the tiles in the upper part of the drawing. It may be hard to notice, but in upper tiled square, I abbreviated the pattern of the first row by alternating vertical lines (|) and the letter ‘G’ in adjacent squares; for the second row, I alternated minus signs (-) with plus signs (+). Likewise, I approximated the design inside line of tiles underneath the border with ovals. It was only upon closer inspect of the tiles, that I found these tiles contained images of sea creatures. The vertical line was a lobster-like creature, the minus sign was a crab, the ‘G’ was a fish and the plus sign was a star fish. The ovals in the bigger squares were the backs of crabs.

The graffiti in the cinder blocks allowed me to include today’s sketch in my graffiti series. 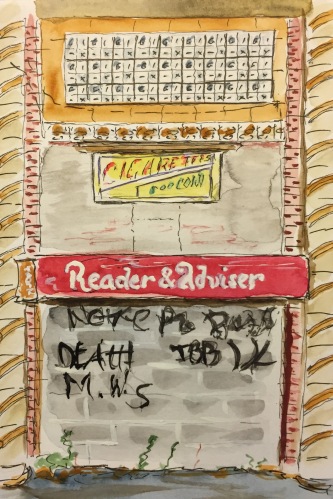 The graffiti is actually interesting as well and, along with the cinder blocks, speaks to the decrepitude of the building.

I wonder if the fortune-telling, former occupant of this kiosk saw this abandonment coming.