I dusted off some of my old black and white photographs to revisit some of the other bookstores I once visited. Have I mentioned that I love bookstores? Those of you who follow my blog may remember the Argosy Book Store painting and photo I posted the other day (Argosy Book Store) and the Madison Avenue Bookstore, next to the Whitney (Vintage Bookstore Watercolor), both in New York City.

I don’t remember when I was in Seattle, but it was quite a while ago. I stood across the street to take the photo below. I remember being really annoyed that the big slanty tree was in the way. At that time I was taking nothing but black and white photos. I developed and printed them myself. It was great fun. 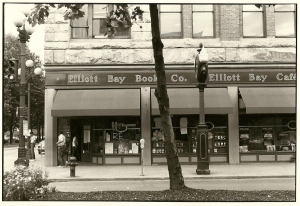 As the title of this blog suggests, part of the experiment today is to choose which colors to assign to which features of the black and white photo. I could have tried to paint using only shades of gray, but instead, I colorized.

I chose a red tone for the awnings, since red and green are pretty common awning colors and I wanted to contrast with the foliage colors. I painted the sandstone blocks above the store a sandy color (again, a relative no-brainer). I used a very light, brick-ish color where the brickwork appeared between some of the windows.

The only colors I really guessed at were for the base of the windows and the two poles. The pedestal for the clock just seemed as if it were green in real life. As for the pole holding the traffic light, it was probably green as well, but I opted for a rusty burnt sienna look.

If I were to work any more on this painting, I would probably darken the street in front and around the corner of the building. Emphasizing this angle would better echo the angled tree on the right side of the picture.

My annoyance about the tree in the photograph is not repeated in the watercolor. I did move it a bit from its original position and increased the angle at which it tilts, but I think this, plus the leaves poking down from the top of the picture plane make the painting interesting. 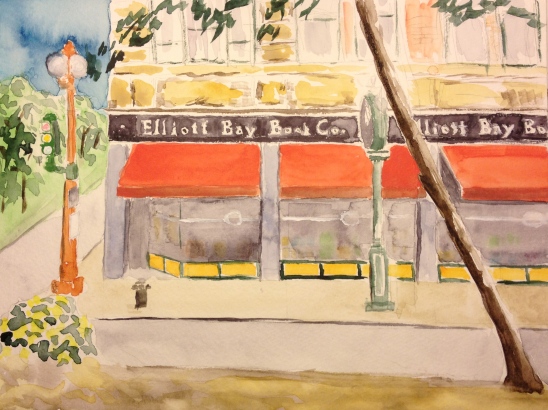 I’m generally opposed to colorizing, but this watercolor experiment seems to have worked. Of course it portrays a different mood than the black and white photograph. It seems to hold its own.