Right now, I’m probably out fishing. I prepare my posts the day before and schedule them to appear at midnight of the next day.

So to get in the spirit, I thought I’d take my ‘point out for a walk’ to ‘make visible’ a photograph I took when I went fishing the last time.

For those of you just joining me, the strange notion of ‘taking a point for a walk’ comes from the great Paul Klee. As a Master at the Bauhaus, this is how he taught his students. The point he is talking about is the point of the pencil. When the point is in motion, it becomes a line. Although this is a playful way to look at drawing, it is really profound when one thinks about what motivates the artist to move of the point. We are lucky to have some of Klee’s teachings still available today: Pedagogical Sketchbook, The Thinking Eye and The Nature of Nature, for example.

Another of Klee’s oft-quoted sayings is, “Art does not reproduce the visible, but rather makes visible.” I believe that he is saying an artist’s responsibility is to ‘make visible’ the vision that is in his or her head. I understand the concept, but I still don’t know how to make that happen.

I am proceeding in baby steps.

I took my point out for a walk yesterday when I drew the top view of Arthur, my pet avocado. Although it wasn’t an ‘automatic’ drawing, I tried to let my hand move as my eye followed the contour of the leaves. I was pretty happy with the results, even though the lines overlapped.

I found the photograph of a trout I caught last month and eased my eye over its contour. I thought the point of my pencil was following and was doing pretty well until I got to the bottom contour. I ended up with a very fat fish. Perhaps I was ‘making visible’ my desire to catch one like that… but I don’t think so.

Outline is one aspect of the study, but coloration is another. In all honesty, trout do not appear as green as my study shows. The photograph has a range of really bright highlights near the fish’s head. I was unable to reproduce this effect. Perhaps I should try some opaque gouache. I could have planned ahead and covered the highlighted area with latex masking fluid.

I haven’t yet read about Klee’s approach to color. However, I did intend to match the colors from the photograph with my watercolor colors. There actually is an overall greenish hue to the fish – especially the dorsal side (but not as green as in the watercolor below).

I began with a yellow wash, intending to render a greenish hue with an overlay of Prussian blue. It came out the wrong shade. I probably should have started with an olive green, or experimented with a combination of yellows and blues that would have resulted in a color closer to that of the actual fish.

I was less careful about the red-orange slabs in the foreground. Those objects are the fish filets from different fish. I am happy with their abstract nature, which matches the strange-colored fat fish that dominates this study. 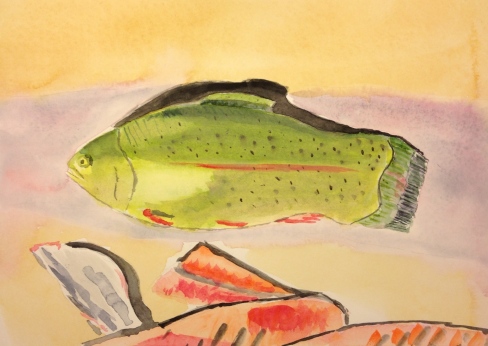