The next step in You Can Paint Vibrant Watercolors in Twelve Easy Lessons by Yuko Nagayama is painting grapes and mangos. The only grapes I had were very good, but I ate them and I didn’t have a mango. A few days ago, I bought my wife a hydrangea that had very dramatic coloring. I thought this would be a great substitute for the grapes. The hydrangea bloom consists of a bunch of miniature flowers all gathered together… almost like a bunch of grapes, only with much more elaborated shapes. 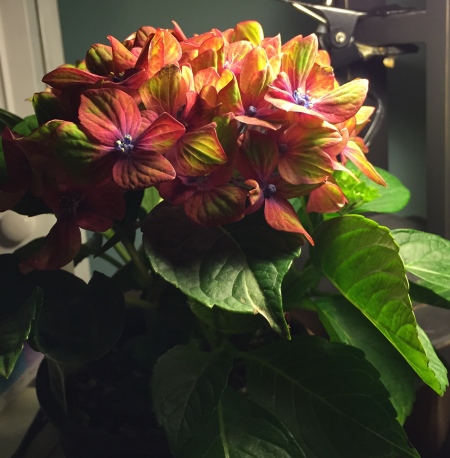 One feature that struck me as unusual was the purple color of the stamens at the center of some of the component flowers. The dramatic red-to-green transition also caught my eye.

I began with a sketch and tried to apply the lesson of the ‘grape’ chapter. Ms. Nagayama advised against drawing each grape individually, concentrating on just a few of them. This is what I did with the flowers. I filled in the spaces between the flowers I drew from the actual bloom, with hydrangea-looking flower parts.

I started painting the lighter areas with phthalo yellow green, but switched to lemon yellow. I thought I would have a bit more flexibility beginning with an underpainting of yellow. I tried a few different reds: permanent red deep (MaimeriBlu), cadmium red and carmine. Ultimately, I used carmine for the parts of the bloom in shadow and cadmium red for the brighter areas.

I was not satisfied with the shadow areas, which I painted with the most concentrated carmine red. Adding a dash of lamp black seemed to solve that issue. I didn’t mind that the shadowy red lost its saturation. It appeared desaturated in real life.

I tried different combinations of red and yellow green for surface of the petals and the dark veins that revealed themselves through the oblique lighting. I did not succeed with these colors and again used lamp black to delineate the veins of some of the flowers.

I like the overall shape of the bloom, but I didn’t seem to capture the lighting of the petals to any satisfactory degree. Unfortunately I wasn’t able to capture the purple center of some of the flowers either. The object of my next hydrangea practice session will be to try capturing an individual flower or maybe just one petal.