I like texture. The other day I added texture by mechanical means: my safety razor. I thought I could give my rough-textured paper a clean shave, but the edge just kept skipping around, creating parallel gouges.

Today I started my study using a dry brush. I’m back to my old habit of arced brush strokes. Prussian and cobalt blue were adjacent to each other on my palette, in reach of the wide brush. I drew my double-loaded brush in a partial semi circle until the pigments ran out. The roughness of the paper made remaining pigment sparse, accentuating its texture. 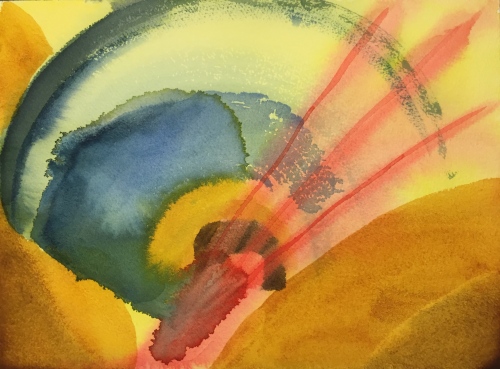 The first, double colored stroke was not color saturated – the upper half less so than the cobalt lower part.  I washed the entire surface with lemon yellow and let it dry partially.

I outlined the top and sides of the partial arc with shadow green, another unsaturated color. Toward the center of this construction, I used by beloved earth tones: the yellow ochre surrounding the Van Dyke brown.

In yesterday’s watercolor/photograph comparison, I realized that painting could depict a moment as well as photography.

From time to time, my method of painting becomes subverted by what is going on around me.  I had an in-the-moment moment today. It must have been frustration, because I took my brush laden with Winsor red and made three rapid strokes originating from the center of the arc.  The wet paper dispersed the color fairly rapidly.  After drying, I overlaid the rapid strokes with more deliberate, slower strokes of Winsor red.

I echoed the V shape of the red arrows with yellow ochre arcs on either side and reinforced the Van Dyke brown between the rays of red.

This study was fairly successful, in my estimation. The textured appearance comes from the roughness of the paper, the sputtering of the pigments at the periphery of the arc and the blotting of the red at the vertex of the three red lines.

The title, ‘On Target’ belies the fact that I started my red-arrow strokes from the bull’s eye center instead of aiming for, and hitting the bull’s eye. I claim this right under the extended aegis of ‘poetic license’.