Everybody has a position in which they are comfortable. I’m not sure if this is the case with the owner of the hands in today’s study. M___ was a classmate of my brother Michael at his Day Program. For those of you reading my blog for the first time, Mike is my older brother who is autistic, low functioning and nonverbal. It’s hard to imagine a person who functions at a lower level than my brother, but M___ seemed to have fit the bill. Like Mike, M___ was at Willowbrook, the infamous institution on Staten Island, New York. One of the staff told me that M___ was able to talk before he went in, but not when he came out.

M___ was practically blind. I remember the time I was in Mike’s classroom when M___ was there. I sitting there, looking at Mike and I felt something cold on the top of my head. A staff member told me not to worry, M___ likes to smell things. The cold thing on my head was M___’s nose.

M___ was a gentle soul. I encountered him at one of the parties put on by the group home. I think he was unattended for a moment. I asked him how he was. He took my hand. M___ was vibrating! I don’t know what he was feeling, but from his shaking, I imagine he must have felt how I would feel if I had 10 cups of coffee. How awful.

Although I wasn’t supported to take pictures of anyone but Mike, I took M___’s picture. The sketch below is a study of M___’s hands. He was not engaged in any visible activity; he was just sitting there. In the photo, his hands are separated by a greater distance. It looks as if he is playing “cat’s cradle”, with imaginary string between his hands. 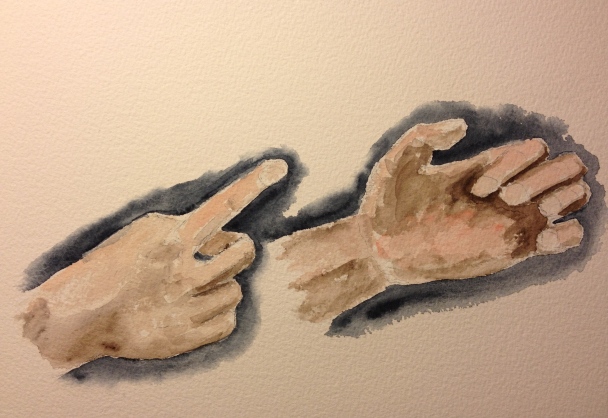 The visual elements in this study are the two hands. There is nothing overtly out of the ordinary about them. The hand on the left is not pointing anywhere in particular. It is possible that the hand on the right could be in motion. Visually, this is not an exciting image.

In my opinion, the emotional content from the image is activated if one realizes that the hands are in a resting position. This is not a usual position for idle hands. The position of the hands in the original photograph convey a much greater tension. As I mentioned above, one can almost see the tension on the strings of the imaginary cat’s cradle between the two hands.

Instead of being a study highlighting the emotional content of hand gestures, I see this sketch as an exercise in form. that is, practice in drawing hands. I will be re-sketching this in larger format to include the original relationship between the two hands. Hopefully in that sketch, there will be more emotional content.