It is a real thrill to make contact.  We visited our grandchildren in October of last year. William turned 7 months old while we were there. He was quite different than when we first saw him, after he was born. Then, all he did was sleep. As I understand things, infants can’t see that great a distance for a few months, so all my wit and wisdom were lost on him.

However, on our last visit, he really liked my silly noises, tricks and sea chanties. I was able to get him to sleep by holding him and walking around. It provoked a lot of emotions in me. I remember similar emotional times, like when Sidra, our granddaughter (now 9 years old) grasped my hand while crossing the street. She would plead with her mom to let me take her to the park. Just before they moved, Sidra was so sad. She said that she would miss her outings with me. I was really touched. This may seem strange to many of you, but think my reaction comes from missing the whole fatherhood thing. Perhaps as a grandfather, I experienced – in diluted form – some of the emotions new parents feel.

I used to visit my brother frequently with my parents, shortly after he was placed in a group home. This was after Willowbrook was shut down due to widespread institutional abuse. Mike is autistic, very low functioning and nonverbal. Mike was in his own world. I never really knew if he was aware that I was his brother. Needless to say, there was never really a connection.

I started a long-term photography project about Mike, and would alway show up with a camera. The study below is from a photograph I took while we were all out for a walk in a park near Mike’s group home. I offered my hand to him and was able to capture the moment before we made contact. It was a very pleasing moment. 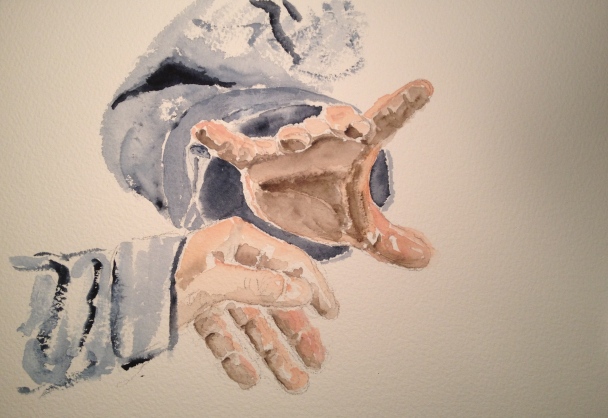 I haven’t posted the photograph from which this gesture is excerpted. I don’t know if the reaching hand is held in a unique position, but I recognize it as my brother’s hand. His pinky finger is extended, which is how he usually holds it.  Perhaps you will notice it in some of the other gesture studies of Mike’s hands:  When Mike was in Hospital, More About Gestures, Toward One or Two Lines.

This study impacts me emotionally in the same way as other human contact affects me. I feel (as the owner of the hand being reached for), acknowledged and appreciated. Taking myself out of the picture, I believe the study shows an attraction between the two hands, which is also emotionally evocative.