Gestures can sometimes stand on their own. For instance, a ‘stop’ icon does not have to be paired with anything to make sense. However, as one can see in the photograph from which yesterday’s ‘stop’ icon was abstracted, a widened field of view adds a context which may alter or change the sense of a gesture.

Instead of beginning with the abstracted gesture (as I did in ‘Hands in Context‘), today I begin with the photograph. I remember taking this picture. It took place in an instant. I saw that my father was trying to make contact with his son (my older, autistic brother), to no avail. I didn’t even have time to focus. I had a sense of what was going to happen though, since it was typical for Mike to avoid contact.

The paired hand gestures in this photograph tell most of the story. Mike’s face tells the rest. My father is reaching out to his son, while his son rejects him. Mike’s clenched hand and his posture in relationship to his father has a lot of emotional content.

Can the paired gestures tell the story?

A single hand reaching out has some emotional content. When one reaches out, one usually wants something: to retrieve something, to comfort someone else; to ask for something, for example. One is vulnerable when one extends one’s hand.

Can the photograph above be abstracted to a pair of hand images, while maintaining its emotional content? The pen and ink, watercolor wash study below pairs an outstretched hand with a closed hand. The closed hand is not a fist, but rather an awkwardly held closed hand. 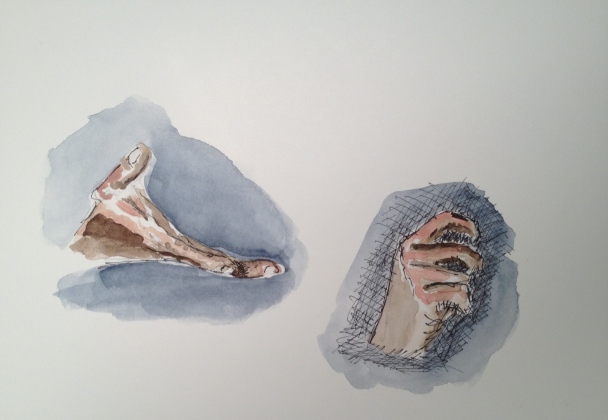 Below are further abstractions of a hand reaching out. I like the final one on the lower right, which is the simplest of the lot: one or two brushstrokes. I think this is a successful representation or ionization of the reaching-out hand. 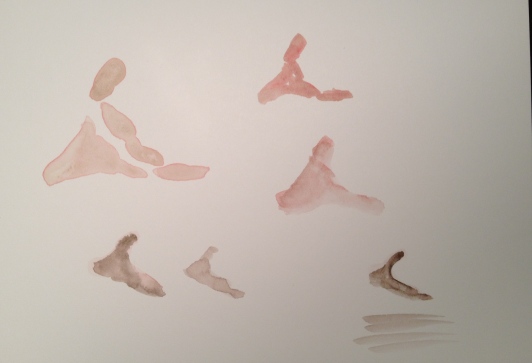 Whether I can perform the same abstractions on the clenched hand remains to be seen. It would be a powerful pair of icons if I am successful.