When I lived in NYC, I wandered around the streets, usually with my camera loaded with black and white film.  I had loaded my mind with some of the classic photos of old and, in some cases, even tried to find the addresses of some of the doors photographed by Minor White and photographers of his era.  I was gratified, on one occasion, by a conversation with my Uncle Harold, when I showed him some of the photographs I took of Superior Florists, a flower shop where he worked, in the Flower District.  He said, “Your photos remind me of Gene Smith’s.”  I gulped. W. Eugene Smith was a world famous photographer in the 1950s and 60s, with such photo essays as the mercury poisoning at Minamata, the Jazz Loft and numerous spreads in Life Magazine.  “You know Eugene Smith’s work?” I said.  “Sure,” he said, “His studio was across the street. He used to come in here all the time.”   As I thought about it, I remembered that my Dad said that our 1957 Chevy, parked next to Superior Florist, was pictured in an issue of Life.  The very next time I happened by Superior Florist I looked across the street, hoping to see The Studio. However, all I could see was a fast food restaurant.

The photograph below is a transition piece: to color, from black and white.  I loved the subdued grays and browns of the background, but the red yellow and blue bits of color toward the bottom of the picture (which I hope are visible in the print below) were heralds of my color photos yet to follow. 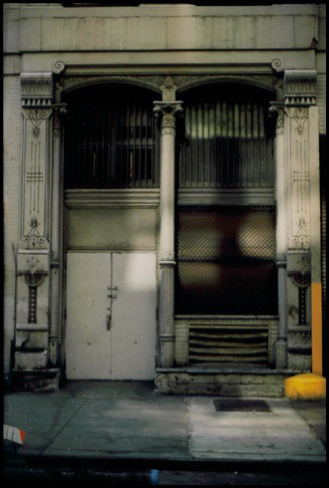 2 thoughts on “Side Street”