I was very happy with yesterday’s experiment, thanks to inspiration by Maurice Sapiro’s Flash Point. So happy in fact, that I tried again today. 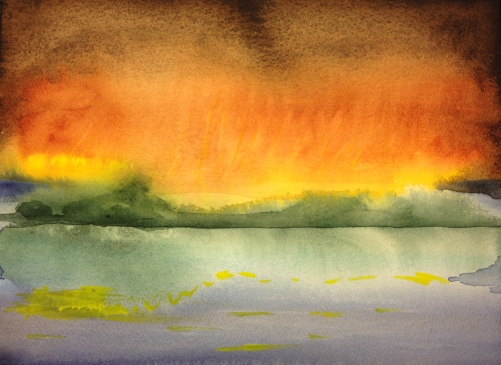 When I become interested in something, or inspired, I tend to obsess. Perhaps this trait developed when I was a child learning to play the violin. Practice, practice, practice… Listening to my sound, I tried to make adjustments so it would match with the sound in my head. I have found that my method of learning translates to other arenas.

Sometimes, instead of painting an entire study, I paint a series of tests, as I did the other day. Other times, I use the same motif, making slight variations until I am relatively satisfied, or overwork the painting.

I started today’s painting from the top and bottom on a pre-wet rough paper surface. I applied Van Dyke brown on the upper portion of the frame. Below the first brush stroke of the brown wash, I applied quinacridone burnt orange. This is a volatile pigment that I thought would migrate quickly through the brown. Lemon yellow was the next color applied, below the orange.

I used a combination of indanthrone blue and Payne’s gray on the lower part.

The middle part of the painting, at this point, was blank. As it was still wet, I decided to draw a line of Shadow Green, just under the midline of the picture plane. I was a bit surprised to see the bloom of the green, as the water-moistened paper wicked the pigment away.  This is was the moment when the foreground became water.

I am pleased with this study. It could be better, for instance, I would like the dark of the sky to be darker to be in direct contrast with the bright orange and yellow. But I am sure, with practice I will improve.