Those of you just joining me may not know that I have a pet avocado plant that I named Arthur. I had a difficult time getting him off the bottle he was sprouted on. It seemed that when I transplanted him the first time, I had the wrong kind of dirt (who knew?).  So I put him back from when he came until the brown edges of his leaves stopped their relentless march to the center vein.  When I transplanted him the second time (with potting soil) it was touch and go for a while.  I used to sit with him, under the shade of his leaf, and he eventually pulled through, I’m happy to say. Check out Arthur when he only had a couple of leaves: (View from the Top).

Here is a watercolor sketch that I did today. Arthur is flourishing! From his single sapling trunk, he just kept bifurcating and bifurcating, until it was really difficult to see any pattern. Now he looks like a mass of leaves. 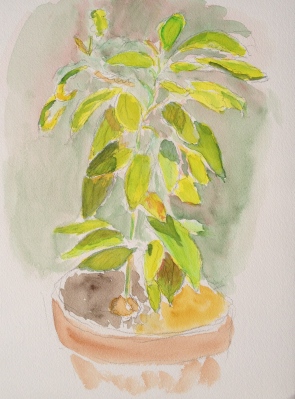 I began this experiment as a pencil sketch. It wasn’t easy, since it was so bright outside and the white paper nearly blinded me. It took me quite a while to get my sight back once I came inside.

At first, I painted the parts of the leaves in sunlight with lemon yellow. For the shadows I used Hooker’s green along with Winsor red; for the brighter greens I used phthalo green (a bluish tint – which worked well with the underlying lemon yellow). I used burnt umber for the pot, yellow ochre for the soil in sunlight and warm sepia for the soil in shadow.

Since there were too many leaves to draw before the sunlight burned my eyes, I put down a light wash of Winsor red as a background, behind the leaves and dropped in some Hooker’s green to suggest more leaves in the background.

After photographing the version of my sketch, seen above, I washed the entire painting (except the pot and the soil) with viridian green. I re-glazed the explicitly-shaped leaves with lemon yellow.

Here is the finished sketch:

3 thoughts on “Checking In On Arthur”