I began with scribbles (as usual), but then concentrated on creating a basic solid shape. I used to practice my pencil-shading technique. with basic solids; cubes, cones and spheres, for example. The idea of ‘basics’ set me thinking about classrooms and blackboards. When I was in school there used to be large expanses of matte-finished slate (called blackboards) at the front of the room on which teachers would write with chalk.

After I deposited my scribbles and cryptic runes, I filled in between everything with black so it would appear that all my musings were done on a blackboard.

Before adding the blackboard coloring, todays experiment looked like this: 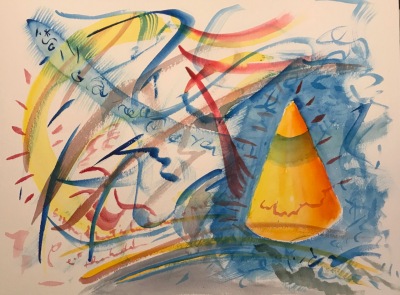