I took my granddaughter Sidra to the bookstore. She loves going there. The only trouble is, there are too many choices. She has read most of the Warrior Cat books, but that was not why we were there. She considered these mini-minecraft things (I don’t know what they are except they come in these small cubic boxes), but she put them aside after finding a miniature kitten family. After we settled on a living room set, she had to choose between white kitties or the caramel ones.

Time was getting short. We had to be back at the house so her dad could pick up mom at work. She just couldn’t make a decision without going through her process.

1) She put the two kitten family boxes down, closed here eyes and moved them around like a shell game huckster.

2) She twirled herself around several times with her eyes still shut.

3) After asking me if she was positioned correctly, she picked one of the kitten families. 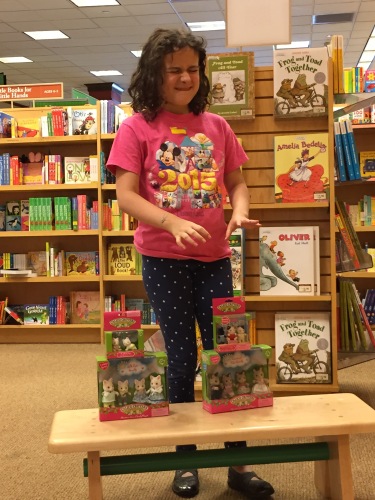 After all this, she sought out one of the bookstore employees and asked her for her “independent opinion”.

In the end, she was satisfied with her choice. We were both very happy.