Yesterday’s post was a rendition of a grouping of fig leaves in situ on the fig tree in our back yard. I was attracted by the fall colors and shadows. I left the composition without unifying the disparate shapes of the different color/shading values, leaving a rather abstract collection of forms.

Today, I sketched a single fig leaf that had fallen to the ground. The leaf was in an early stage of decay, edges curling and some autumn coloration in evidence.

As usual, I began with a pencil sketch, marking the areas in shadow. Unlike yesterday’s composition, I began painting the positive shape of the leaf.  I used the green-tinted lemon yellow and the warmer cadmium yellow pale as the first layer of color on the leaf shape.

The quinacridone burnt orange pigment seemed a perfect choice for the rust-colored, crispier parts of the leaf. I did have a little difficulty with the shadow areas under the curled edges. I used a combination of Van Dyke brown and yellow ochre, but their opaqueness imparted a muddiness I was not expecting.

After I had the basic coloration of the leaf blocked out, I began sketching the background. I used the Moonglow pigment from Daniel Smith, that has a purple hue, together with a neutral tint pigment for the rocks. I used Buff Titanium (Daniel Smith) and Van Dyke brown for the remainder of the background: the different shades of soil on the lower right side of the paper. I glazed the entire area surrounding the leaf outline with the semi-transparent Payne’s gray (Sennelier). This had the effect of bringing the leaf into the foreground a bit. It also flattened out and obscured the shades of the soil that I had just applied.

I found that it was necessary to outline the edges of the leaf so the shape within the lines would be clear. I also detailed some of the veins, outlining some of them with white, to mimic the effect seen in the photo. 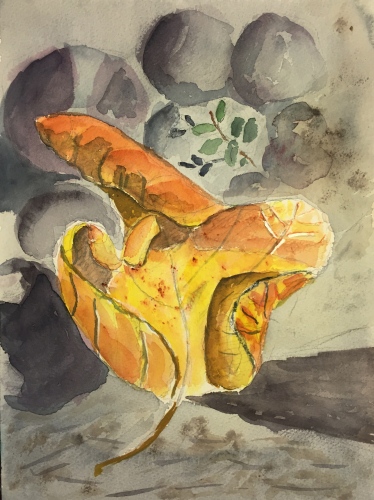 I like this piece. It is not abstract, as was my composition of yesterday. But it also does not have the three-dimensionality of the photograph. I don’t feel bound by the need to imitate the photo, but I would have liked the leaf to be a bit more separated from the background.