Artistry of the Mentally Ill

I checked out Artistry of the Mentally Ill,  by Hans Prinzhorn from the library a couple of weeks ago. I just started reading it. It promises to be a storehouse of information relevant to understanding human creativity. Prinzhorn (1) was an art historian as well as a psychiatrist and expanded upon the collection of art by the mentally ill, begun by Emil Kraepelin, (2) a key figure in modern psychiatry. Contemporary artists of the 1920s read  such as Jean Dubuffet, Paul Klee, Max Ernst and others read Artistry of the Mentally Ill, which was originally published in 1922. (3)  There was even a name applied to this type of art: “Art brut (French: [aʁ bʁyt], “raw art” or “rough art”), [was] a label created by French artist Jean Dubuffet to describe art created outside the boundaries of official culture; Dubuffet focused particularly on art by those on the outsides of the established art scene such as insane-asylum inmates and children.” (from http://en.wikipedia.org/wiki/Outsider_art)

The term ‘configuration’ represents a key concept, and starting point in Prinzhorn’s presentation of work of the mentally ill. However its usage in terms of artwork wasn’t that clear to me at first. In the forward of Artistry of the Mentally Ill, the German word Gestaltung was inserted parenthetically after the term ‘configuration’ was introduced.  A translation of ‘Gestaltung’ yielded the following terms: shaping, layout, formation, composition, arrangement, structuring. In other words, Prinzhorn uses the term ‘pictorial configuration’ to mean the morphology of the artwork on the page.

This is the title of the first chapter of Artistry of the Mentally Ill. Prinzhorn’s work was the first of its kind. Instead of looking at the configuration of a pictorial composition through the eyes of an art historian or through the cultural lens of the general population, he sought to analyze its elements differently:

“We expect to be able to trace the major characteristics of a work far back into the process of configuration which, reduced to its essential features, will give these major characteristics prominence as clearly defined and describable psychic functions. We also believe that the creative process, stripped of individual traits and of every relation to secondary elements, will allow us to comprehend the metaphysical meaning of configuration, which civilization generally obscures by establishing extraneous ends.” (from Artistry of the Mentally Ill, by Hans Prinzhorn New York: Springer-Verlag 1972 pg 11)

Prinzhorn’s idea of identifying a creative process with a psychic (or brain) function seems to be the same principle that neuropsychologists use. Wikipedia defines neuropsychology as follows: “Neuropsychology studies the structure and function of the brain as they relate to specific psychological processes and behaviors.” (4)

Although I haven’t read very far, I am very much interested in how Prinzhorn assesses creative elements in terms of ‘psychic functions’.

In keeping with my attempts to discover the psychic elements of my own art, I continue with my daily watercolor studies. I painted the work below as a way to familiarize myself with basic techniques. Perhaps mastery of technique is not a prerequisite for unearthing the psychic functions behind one’s artwork, but I would feel much better not having to think about technique.

This study was inspired by the sunset I saw yesterday. 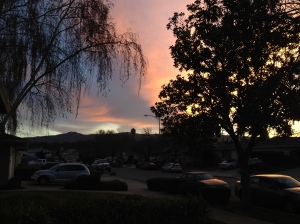 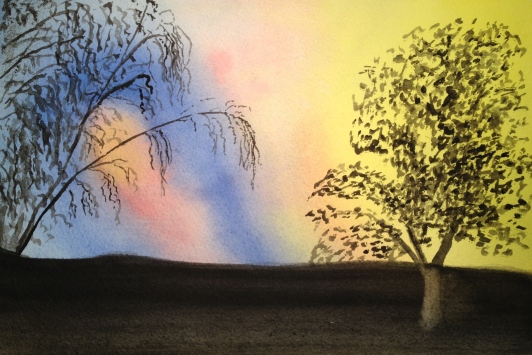