I guess my brother Mike* is out of the Intensive Care Unit because I got a FaceTime call from the hospital for a video visit.  Even if Mike could talk, he is on a respirator which prevents anybody from speaking.  The docs called Dave (my younger brother) and me over the weekend to tell us that Mike did not tolerate being removed from the respirator and that his heart stopped for a whole minute. Thank goodness that Dave and I made it clear that we wanted the best care for Mike. (I’m sure they would have done CPR in any case, but I’m glad they knew someone cared for the totally helpless and uncommunicative person.  They have also been in contact with Mike’s group home, whose staff also cares a great deal about our brother.)

I spoke to Mike for about 5 minutes. I though I saw his eye move when I called his name. After the call, that I captured on my computer, I had to enlarge one of the frames in order to get a better look at his eye.  It was indeed open, but was gazing up, on nothing in particular.  Mike also had a tremor of some kind.  I wish I could have touched his arm or pat him on the chest, like I used to do.  When I saw him regularly, many years ago, I used to hold his hand when we went for walks. 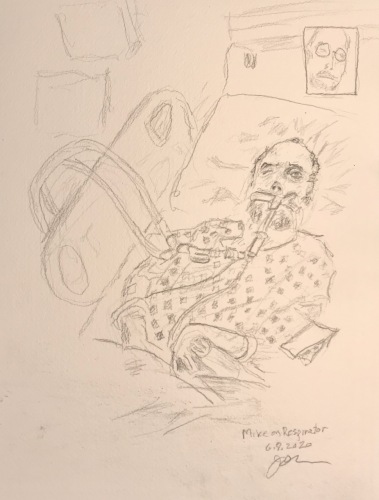 *My older brother Mike is autistic, low functioning and nonverbal

3 thoughts on “Facetime with Mike on a Respirator”