One of the more fascinating bits in Eric Kandel’s* book, The Age of Insight was an alternate appreciation of the people who drew the cave drawings in the Chauvet caves, estimated to be about 30,000 years old.  Art historians, including Ernst Gombrich noted that the realistic representation of horses in these caves implied that the humans who drew them must have had fully-developed brains. They argued that the painted figures were instances of use of symbols to communicate.

In the section about savants, Kandel related the story about Nadia, who began to create realistic drawings of horses at age two and a half. Nadia, at age 5, had not yet developed speech or social interactions, but was able to draw stunning, fully detailed pictures of horses. (Kandel refers to the book by Lorna Selfe, Nadia: Case of Extraordinary Drawing Ability in an Autistic Child (1977).)

The psychologist, Nicholas Humphrey noted the striking similarity between Nadia’s drawings and those in the caves at Chauvet. His thesis was that the humans who drew the horses on the cave walls 30,000 years ago may not have developed speech or the ability to communicate socially.

On a personal note:

My brother is unable to communicate verbally. He is a mystery to me. In my artwork about Mike, particularly my transcription from family photographs to sketches and paintings, I try to reduce realistic portraits to abstracted, icon-like symbols which might contain a nub of truth about Mike’s state of mind at the time.

I did a couple more distillations (a sketch and a watercolor) of the facial expression of older brother Mike (autistic, low functioning and nonverbal). See Portrait, Mike and Mom, Abstract Portrait Mike and Mom, Mike – Close Up, Continuing to Abstract, Dividing Shadow and Focusing In, for the earlier versions of this study. 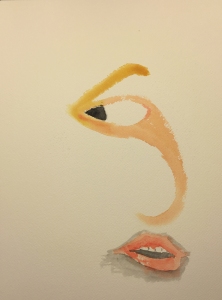 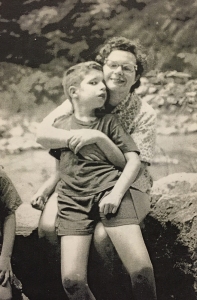 * Eric Kandel is a Nobel Prize winning neurobiologist and Professor at Columbia University.

4 thoughts on “Autism and Cave Paintings”