Thank you everyone who has been following my personal drama. I came out of the kidney stone procedure with flying… colors, I guess you could say.

I started this morning (the day of the surgery) by imagining all the dream images I would be privy to under anesthesia: The wicked witch of the east, together with the tornado; the wrecking ball; the rock of Gibraltar and the laser gun.  I thought that I could put together a great production number, ala Salvador Dali’s dream sequence from Hitchcock’s Spellbound; a variation of Sam Spade’s journey after he was hit by a sap and his voice over said, “a dark hole opened up at my feet and I jumped right in,” from Murder My Sweet; or even Humphrey Bogart’s character’s unconscious encounter with his plastic surgeon in Dark Passage.

But it was not to be.

Nothing.  I remember that my Dad wondered out loud to me, after he came out of heart surgery, if I thought death would be like that split second of nothingness that took place during anesthesia, only lasting forever. I told him I thought that it was a plausible supposition, although there is a deep level of consciousness during anesthesia, there is none in death.

Here is the rest of today’s experiment: 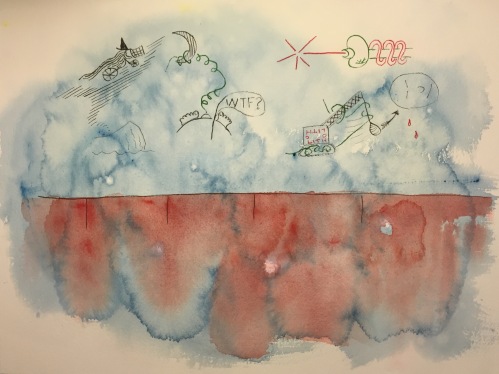