We had a great time with the kids. Today was exhausting, although I didn’t do much to exhaust myself. It was William’s first easter egg hunt, which seemed a matter of course to him, as he is always hunting for something. He is just so curious about everything, continually looking everywhere for something he hasn’t seen before – and iPhones. 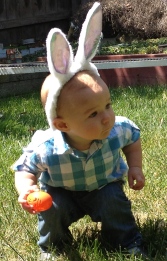 Right after dinner we took everyone straight to the airport. A sudden vacuum ensued. It might take me a day or two to compartmentalize again, but I’m sure I can do it.

The other day, when we went to that store that sell high end healthy food, I saw a fruit I had never seen before. The bin in which they were stored must have been re-enforced. They were as big as watermelons, but heavier. It was my introduction to Jack Fruit… no kidding!

Here is a photo of them. 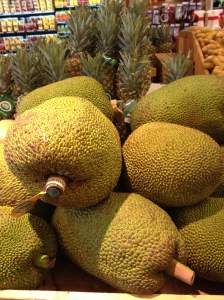 The pineapple in the background should give you a good idea of the scale. The skin is rough, covered in small spiky things. I would have bought one, but they were sold by weight and the lightest one was 12.5 pounds! Someone told me they were really good tasting, though.

I started my drawing as a pointillist exercise, since I could not figure out a different way to convey the surface texture. I’m glad that I used a small format (5″x7″) paper. Even polka-dotting this small area was tiring, especially in my current state. I finally washed each figure with a color that I thought represented the overall hue of the fruit, and had to re-polka-dot the washed area, since the original dots merged with the wash. I ended up washing the background in a complimentary color to the predominant green of the figures. 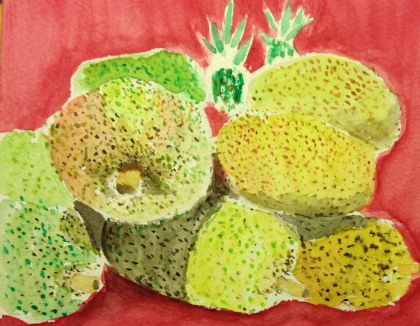 It might be fun to buy one of these at some point. I can imagine a watercolor study of its surface texture alone. I also wonder what the insides look like.

If William were still here, I’d bet he’d like to see it too.