Joy and Beth prepared for Will’s birthday gathering for what seemed like weeks. They commissioned a special birthday cake for the guests and one for Will himself. I didn’t know there was a special name for a kid’s cake. They call it a ‘smash’ cake. Is this just a California thing?

One look at the picture below and one knows how the cake got its name.

Actually, I think Will was surprised when he was encouraged to dig in. He had to be coaxed a little bit.  His Mom and Dad had to change his clothes and practically had to put him in the shower after this episode.  Sidra got into the act as well, but not to the same extent as Will. 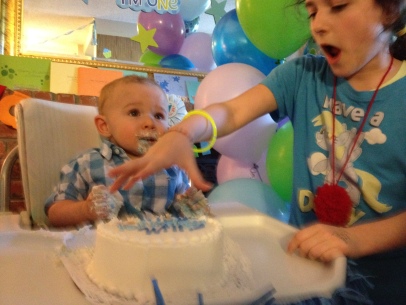 I have nothing philosophical to say at this point. I only hope that everything goes according to plan and all the crises to come are the normal ones of sibling hood and not overly traumatic. I’m glad, in a way that I’m not involved on a daily basis. I would become a nervous wreck. I’ll leave this to Siddy’s and Will’s parents. They are doing a great job.

I suppose that is one of the perks of grandfatherhood. I’ll take it.