We arrived very late. I appreciated the humor of the Southwest Airlines crew, but I am glad that it was a relatively short flight. I had traveled the New Jersey Turnpike to where my mother lived, many times before, but rarely in the dead of night, and even more rarely in a cab or limo. A__ the driver was a friend of my mother’s who drives for a living. He was great. We asked if we could call him for short trips, he answered in his thick Russian accent, “Why not?” 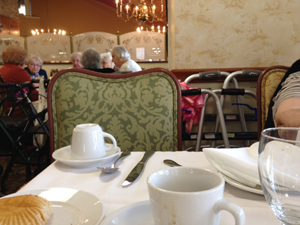 My mother moved to an independent living place not far where she and Dad lived in the retirement village. Since my father died, she had been by herself in the house. I am happy that there are now people around to help her and that she is not isolated any more.

The guest apartment is directly beneath my mother’s place. It is a lovely place, although the bed could be a little softer. Mom called us in the morning and we went upstairs to meet.

We hadn’t seen my mother or any family on the east coast for 2 years. We would have liked to come earlier, but circumstances did not allow a visit until now.

There are many conflicting feelings for me to process; I believe that I should resolve them at least partially before writing for public consumption. I do a lot of thinking by writing, but I don’t always resolve things on the first pass. (I know! Hard to believe, isn’t it?) So, I’m going to write, think, edit, think some more and when I’m done processing, I’ll have some posts about my interesting time in New Jersey.

Until then, it is to the archives for more back story.