Phrenology is the study of bumps on the head. 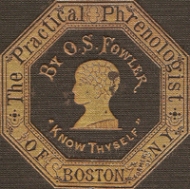 The word phrenology is made up of two Greek words: ϕρήυ, mind and λόγος, discourse. Therefore phrenology is the study of the mind.  Franz Joseph Gall (1758-1828), a German neuroanatomist and physiologist, postulated that the brain was the seat of the mind and that specific functions of the brain could be localized to particular places in it’s cortex, the outer part of the brain known as the ‘gray matter’. Gall went on to associate the bumps and depressions of the skull with the functions underlying cortex. It is a bit mystifying that a scientist could make a leap of that sort. But Stanley Finger explains, in Origins of Neuroscience,[1] that Gall was probably influenced by childhood experiences and the times in which he lived, when physical traits were associated with temperament. Gall collected human skulls and studied the bumps and divots on each. He knew the personality traits of the original skull users, and used them as further evidence for his theory. He also used the dimensions of animal skulls as part of his calculation. For instance, one of the reasons that Gall located the quality of “Destructiveness” above the ears was the fact that this was the widest part of the skull of carnivores. The other reasons for locating the quality of destructiveness there came from his observations that “…[A] prominence was found here in a student who was ‘so fond of torturing animals that he became a surgeon.’ And third, this region was well developed in an apothecary who later became an executioner.”[2]

Phrenology became popular in the mid 19th century. The do-it-yourselfers at the time used books like The Practical Phrenologist[3] With the encouraging words ‘Know Yourself’ people were encouraged to get out their tape measures to discover their best and worst qualities.

Gall did not have the wrong idea about localization of cortical function. Paul Broca, a French physician, was the first to demonstrate functional localization to the satisfaction of the scientific community. His clinical study of 1861, which linked articulate speech to the frontal cortex, paved the way laboratory studies where other functionalities were linked to specific areas in the brain.[4] Michael Gazzaniga through his work with ‘split brain’[5] patients, also proposed a modular arrangement of functions in the brain[6].

Changes in personality due to brain injury were noted as early as 1848, when Phineas Gage received the first frontal lobotomy, courtesy of a long iron rod he used to tamp down explosives in his work with the railroad. Something went wrong, and the iron rod went through his skull damaging his frontal lobes. Although he miraculously survived, Gage’s friends and associates noted definite personality changes. This was attributed to the part of his brain that was injured. The Russian neurologist, A.R. Luria wrote an account of a brain-injured soldier in The Man with a Shattered World.[7] In this fascinating account, Luria details the injury that made it impossible for the soldier to remember anything from his recent past. He also provides a heartrending, broken narrative from the soldier himself, showing the hopeless confusion and devastation caused by the injury. Luria’s work with other brain-injured soldiers led to a new field of study called neuropsychology.

Neuropsychology uses knowledge of functional localization gained from the study of neuroanatomy, neurology and neurophysiology to discover the strengths and weaknesses of different brain functions, through psychological testing. This makes sense. For instance, if one part of the brain is responsible for calculation, the individual successful with arithmetic operations has use of that part of the brain.  If a person cannot remember something from 15 minutes before, there could be something wrong with the brain systems responsible for memory, and so on. There are untold numbers of cross connections in the brain, and many variables that could affect the results of testing (i.e., states of stress, alertness, etc.), so one can imagine that rigorous and clever testing must be developed and validated for a successful neuropsychological examination. There are also other high-tech machines available today to determine which parts of the brain function for different tasks and operations, such as positron emission tomography (PET) scanners and functional Magnetic Resonance Imaging (fMRI) machines.

Today’s understanding of the brain is a far cry from that of the Practical Phrenologist. However, we should still mind the bumps: the bumps to the head, not the bumps on the head.

[5] In some severely epileptic patients, the corpus callosum, the large tract of nerve fibers that connects the left and right halves of the brain, was surgically cut in order to prevent the spread of seizures.