My blog was originally inspired by a need to share my experiences as a sibling to a severely autistic, low functioning, nonverbal individual, my brother Mike.  I am certain this history was the origin of my creativity; I had to explore every possible way to understand him.

I published a series of posts (Young Mike, In Transition, Final Transition) about Mike and his transition from good looking child to a difficult-to-look-at adult. Revisiting the past, the unfolding of circumstances in Mike’s life, the utter futility of attempts to communicate with him culminated in a final portrait (reproduced below) that showed my frustration and discomfort with my compulsion to portray my brother. 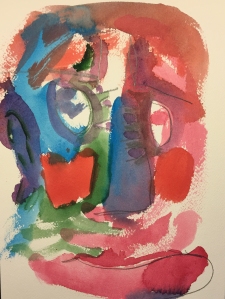 I had to force myself to take a break from blogging about Mike.

I began a photography project about Mike on his 40th birthday. It had always been a problem gaining his attention, but in one photograph one of his eyes was looking right at me. Mike’s other mis-aligned eye was gazing off in another direction. He seemed to be smiling at me. 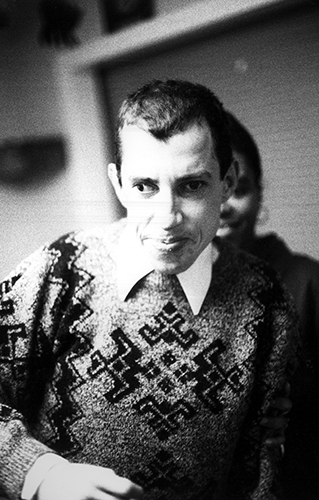 I printed this photograph, covered up half of Mike’s face and was startled to see the attention about which I had always dreamed.

Then I had a brainstorm. I cut the photograph in half and held it up to the mirror. Instead of one eye looking at me, there was my brother, looking at me with both eyes.

The portrait below is a rendition of my mirror portrait, the brother I should have had.

8 thoughts on “Returning to Mike”