I was in London in 1988. Even then I photographed everything and anything that caught my eye. I did not make a note of where I was when I snapped the picture below.  I call it graffiti, but as you can see, there is very little ‘tagging’ as we call it in the US. As I understand the term, ‘tagging’ is a way that graffiti artists identify their work by a certain style or iconic signature.

The scene above is more of a mural although, like graffiti, the canvas on which it resides is a patchwork of different shapes of brick and plastered walls.  A muralist generally does not have to work around a garage set in the middle his or her canvas.

This watercolor was a bit more difficult than the others in my graffiti series. The format is small (4″x6″) and didn’t allow me to include as much information as is in the photo. Even using a very fine-tip ink pen, I wasn’t able to include a lot of detail. 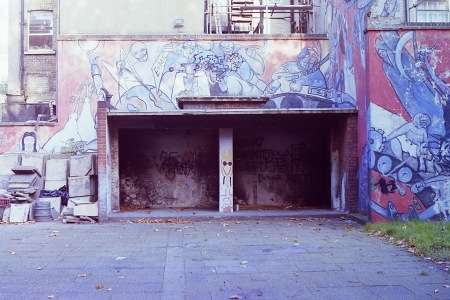 Upon close inspection of the photograph, one can see vignettes containing figures that may be part of a narrative. For example, there is a man holding calipers and other drafting equipment, clutching a placard on which is written Einstein’s famous equation; a couple on a motorcycle and the grim reaper (at the far right of the photograph). Given this information, I am sure that this design is a coherent narrative and therefore, indeed a mural.