Today was busy. I followed my brother Dave around to multiple appointments to make arrangements for Mom’s funeral.He did all the work. I’m very proud of my brother.

Mom just turned 90 years of age less than two weeks ago. She was bright and alert at her party, but the day I left to return to the opposite coast of the US, where I live, she went into the hospital. She died yesterday.

I haven’t had time to feel much about Mom. Dave and I don’t get to talk that much so I have been reveling in our conversations. We have slightly different recollections from childhood about certain incidents. This parallax view adds another dimension to the flat narrative that had become part of my memory. I am glad that Mom was surrounded by friends she had known for a long while and had an enriched life because of that.

When I arrived at Mom’s hospital room last night, I saw a comfortable, warm environment. The half dozen IV pumps were not the center of attention as they tend to be in cold, antiseptic ‘hospital-looking’ hospital rooms. However the one thing I noticed was this red glow from the center of Mom’s forehead. In my usual irreverent manner, I immediately thought of E.T. (The Extraterrestrial). It has been a long time since I have seen this movie, but as I recall: an alien (ET) who wanted nothing more than to get home appeared to be dead but at the last moment, its finger glowed red, whereupon he said, “Phone home.” This was a revelation to the little boy who thought ET was dead.

Well, Mom wasn’t ‘phoning home’. The red glow came from the oxygen sensor, which is normally attached to a patient’s finger. I suppose when they run out of places to put sensors, the forehead is as good a place as any. 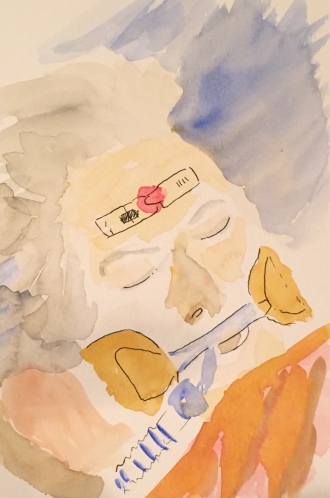 Right now I suppose I’m numb. I don’t feel anything even though Mom was a big part of my life and I loved her. I suspect this will change.