I am proud of this portrait. 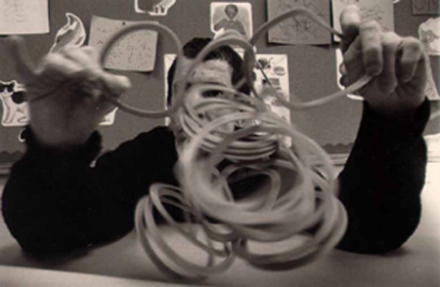 I took this picture at Michael’s school where they brought him from his group home to attend a day program. Mike is profoundly retarded, nonverbal and autistic. I was given permission by the school administration to shadow him and take his picture, which I did on several occasions. On my first visit, one of the school counselors brought me to his classroom. When Michael saw me, he started to cry. I was stunned. I hadn’t seen him in quite a while and thought that perhaps I scared him.  But the counselor said that he had never acted that way with anyone else. Did he recognize me?   He didn’t act as if he was afraid of me.  I had to deduce that he knew me.  I would love to be able to communicate with Mike in real time, rather than deducing that we may have shared an emotional connection.

At that time, Mike’s favorite toy was the slinky. He took it everywhere. I thought of naming this photo ‘Slinky’ or ‘Hoops’.   I also thought of calling it ‘Brother From Another Planet’. In many ways I feel like he is from another planet and this photograph captures that essence. Is this disrespectful?   I intend no disrespect at all. What would you call this photograph?

Maybe this example better explains what I mean:  If you have ever been star gazing, perhaps you were told that if you looked at a faint star out of the corner of your eye, it gets brighter. If you look directly at it, the dimness returns. It is very hard to resist looking directly.

Is what happens with my brother? Is there something really there that I have to look away from to see?  I think this may be true, but I just can’t resist looking right at him. Why do the important things have to be so Zen?

9 thoughts on “Name This Photograph”