Mike always used to slap himself on the head and bite his hand. 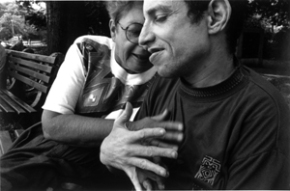 After his time at Willowbrook, Mike was placed in a group home. Some doctors actually started paying attention to him. One of the doctors described his behavior as a “complex motor tic”. So, Mike is Tourettic – on top of everything else?

What is Tourette Syndrome?

Dr. Georges Gilles de la Tourette described Tourette Syndrome (TS) in a patient in 1885.[1]  TS is characterized by the occurrence of tics – involuntary muscle twitches. They can be simple or complex. A simple tic can be an eye twitch, or shoulder shrug or any involuntary movement using a small group of muscles. Complex motor tics are a sequence of motions involving different parts of the body, usually in a pattern. The neurologist William DeMyer notes another hallmark of TS: “Involuntary respiratory actions and vocalizations with squawks, barks, howls or sniffs, humming, and sometimes the involuntary utterance of expletives.”[2]

There is an excellent book Twitch and Shout  A Touretter’s Tale[3] written by Lowell Handler, who suffers from TS, which gives insight to what it is like to be unable to control one’s actions.

The cause of TS is not known, but researchers believe that the basal ganglia, ( a grouping of gray-cell structures called nuclei) located deep in the brain are involved. The basal ganglia have connections with other brain centers and the cortex and takes part in the decision to voluntarily move one’s muscles. Recent research has shown that in TS,  this decision process is disrupted and muscles move without conscious control.[4]  Some researchers attribute TS to a genetic predisposition or to childhood streptococcal bacteria infection.[5]

TS has no cure, however there are medications available to lessen the effects. Other syndromes such as Obsessive Compulsive Disorder (OCD) and Attention Deficit/Hyperactivity Disorder (ADHD) are often found in those with TS.  Sometimes medication for these other conditions help to reduce the occurrence of tics.[6] Surgical interventions have been tried in cases of intractable TS, but these have been unsuccessful by and large.[7]

Back To My Brother

At Mike’s group home, they have tried behavior modification programs to help him “unlearn” his self injurious behavior.  But I thought that if he has a form of TS, which is involuntary  how can a behavior modification program help.  Apparently this type of therapy does have an effect.  The staff at Mike’s group home targeted his self injurious behavior and has met with some success in lessening the number of these incidents.

My hat is off to the dedicated people who take care of my brother.